Once Home to Royalty, the world’s oldest Muslim palace is a magnificent complex with enchanting gardens and fountains, the inspiration of many songs and stories.

The majestic Alhambra Palaces was an ancient palace and a fortress of the Moorish monarch, and is one of the finest monuments of Islamic architecture in Granada, Spain. This UNESCO World Heritage Site is now one of Spain’s major tourist attractions.

The eighth-century-old site built for the court of the Nasrid dynasty in 889 AD, was named for the reddish walls and towers that surrounded the citadel: al-qal’a al-hamra in Arabic means ‘red fort or castle’. The stunning Nasrid Palaces with architectural features of highly intricate and elaborate stucco work, hydraulic fountain and decorative pavilions, is rich in Islamic art.

The Court of the Myrtles, Chamber of the Ambassadors, Hall of the Two Sisters, and Court of the Lions are among the most spectacular sights of the Nasrid Palaces. The Palace of Charles V, inside the Nasrid fortification of the Alhambra, was the royal residence of Charles V after the Reconquista.

One of the best preserved Nasrid estates, just beyond the walls, is the spectacular Generalife gardens. It is one of the oldest surviving Moorish gardens that is adorned with beds of flowers, Baroque courtyards, pools, water channel and soaring water fountains. 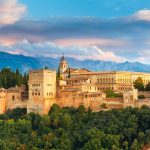 Trevi Fountain Rome's true Masterpiece
The magnificent, iconic, Baroque fountain is the city of Rome most spectacular ornaments, and it is also one of the most stunning fountains in the world....

Gouqi Island Deserted Green Wonderland
An abandoned fishing village in China has slowly been swallowed by dense layers of overgrown vegetation and ivy creeping over every brick and path....

Atlantis The Palm Breathtaking Landmark
A majestic five-star Dubai hotel situated on the Palm, a man-made island that has captured the world’s imagination with its magnificent scale and ingenuity...