This magnificent archaeological city, is Jordan’s most valuable ancient treasure, hidden by time and shifting sand, it tells of an incredible lost desert civilization.

The ancient city of Petra, is one of the most famous archaeological sites in Jordan’s southwestern desert. It is located in Ma’an Governorate, 240 km south of Amman. Named as one of the new Seven Wonders of the World, Petra is Jordan’s greatest tourist attraction.

Dating back around 300 C.C., Petra was the capital of the Nabataean Kingdom. It was carved deep into the desert pink sandstone hill by the Nabataeans – a nomadic desert people whose incredible wealth grew from the lucrative incense trade. Petra was a thriving and prominent trading center, an important junction that linked camel caravans between the Mediterranean and Arabian Seas, from Egypt to Syria and beyond to Greece.

In 1812 a Swiss explorer named, Johannes Burckhardt set out to ‘rediscover’ Petra. He dressed up as an Arab and convinced his Bedouin guide to take him to the lost city. Petra then became increasingly known in the West as a fascinating, ancient city.

Surrounded by mountains and massive structures, Petra, is a honeycomb of hand-hew caves, temples and tombs, carved from rose-pink solid sandstone rock. It is riddled with passages and gorges. The only access is through a narrow canyon called Al Sig, which contains tombs and temples carved into rose-red sandstone cliffs, earning Petra, the nickname – ‘Rose City.’ 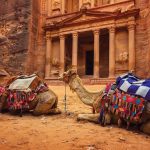 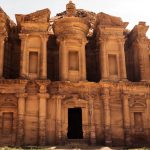 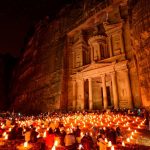 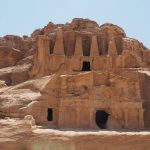 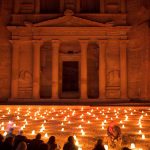 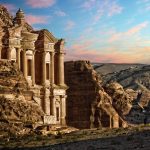 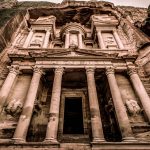 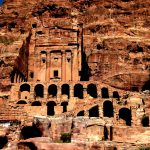 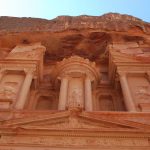