A 20th century explorer and mountaineer, who with Sherpa, Tenzing Norgay, were the first two climbers to have reached the summit of Mount Everest in 1953.

Sir Edmund Percival Hillary was a New Zealand mountaineer, explorer and philanthropist, who had one of the most remarkable lives of the twentieth century. On 29 May 1953, Hillary and Sherpa, Tenzing Norgay became the first climbers to reach the summit of Mount Everest. The news reached London on Queen Elizabeth II coronation day.

Following his ascent of Everest, Hillary devoted most of his life to helping the people of Nepal through the Himalayan Trust, building schools, hospitals, clinics, bridges, an airstrip, and restoring monasteries.

Despite a multitude of honors and accolades, Sir Edmund Hillary remained humble about his achievements right up until his death in January 2008, aged 88. He remains one of New Zealand’s most loved national figures.

Daydreaming for Adventure
Edmund Percival Hillary, was born to Percival and Gertrude (née Clark) Hillary, in Auckland, New Zealand, on 20 July 1919. The family lived in Tūākau, in rural South Auckland. The Hillarys held high moral ideals, such as peace, equality and helping others, values that were to surface later when he began his aid work in Nepal.Edmund and his two siblings, Rex and June attending Tūākau Primary School, then he attended Auckland Boys Grammar School. Small and shy with a poor self-image, Hillary took refuge in his books, daydreaming of a life filled with adventure. At aged 16, during a school ski trip to Mount Ruapehu,, Hillary discovered his love of snow and climbing, and realized that he was physically stronger with greater endurance than his tramping peers.

Beekeeping and Nature
By his late teens, Hillary had grown to a towering 6'5" (195 cm). He spent two years at Auckland University College, then he and his brother, joined their father’s beekeeping business. Despite its demands, he made excursions into the Waitākere Ranges with the Radiant Living Tramping Club which fostered his interest in climbing and holistic health.

First ascent
Hillary enjoyed the outdoors and loved the bush also had the ability to carry a heavy pack. By 1940, he was ready for higher challenge. At the age of 20, Hilary took a short Southern Alps holiday and made a modest scramble up Mt Olivier (1,933 metres) on the Sealy Range above Mount Cook village in the South Island. He later said, ‘it was the happiest day I had ever spent.’ It was his first ascent.

Military
In 1944, Hillary joined the Royal New Zealand Air Force, although he registered as a conscientious objector. RNZAF training camps in Blenheim and New Plymouth provided opportunities to test Hillary physicality. During World War II, Hillary, a qualified navigator was posted to Fiji, then to the Solomon Islands where he was badly burnt in a boating accident.After the war, Hillary returned to New Zealand and pursued his love of mountaineering in the Southern Alps where he learned his ice-climbing skills on the great ice peaks of Aoraki-Mount Cook and Tasman.

Technical mountaineering
Despite his ability and superb fitness, Hillary felt he lacked technical mountaineering proficiency. In 1946, he met Harry Ayres, who was one of the most talented mountain guide of his generation. Over three summers, the pair climbed several peaks including New Zealand’s three highest – Aoraki/Mt Cook, Mt Tasman and Mt Dampier.Under Ayres’s guidance, Hillary became an experienced climber. In 1949, he climbed the Swiss Alps and in 1951, he participated in a reconnaissance expedition to Everest. During his career he ascended 16 of New Zealand’s 34 peaks over 3,000 metres.

Everest summit
In the 1953, Hilary joined the British expedition to Everest, led by John Hunt. The climbers were broken up into teams and Hillary and Tenzing Norgay paired as one team. After the team carved a route through the Khumbu Icefall and the South Col, the first duo assigned by Hunt turned back due to exhaustion.Hillary and Norgay who carried extra oxygen reached the peak of Mt. Everest first - on May 29, 1953, at 11:30 a.m. They spent about 15 minutes at the top of the world. Hillary photographing Norgay (as Norgay couldn't use a camera) holding his ice ax strung with three flags - The British Union Jack, the United Nations and the Nepalese flags. Norgay dug a hole and filled it with sweets, while Hillary buried a crucifix.

Conquerors of Mt Everest
Hillary aged 33, had conquered Mount Everest, the highest peak in the world. This was announced on the eve of Elizabeth II's coronation. Later the queen bestowed a knighthood on the bemused New Zealander. Hillary and Tenzing became the subject of media frenzy. They attended formal events and gave lectures to packed halls.After tackling Mount Everest, Hillary continued to climb mountains and explore new adventures, including mountains in Australia, Switzerland, and ten other peaks in the Himalayas that were more than 20,000 feet high.

More Exploration
On January 4, 1958, Hillary as leader of the N.Z. division of the Commonwealth Trans-Antarctic Expedition reached the South Pole by tractor. He was among the first to scale Mount Herschel in the Antarctic expedition of 1967. The following year, Hillary traversed the wild rivers of Nepal on a jet boat. In 1977, Hillary and crew attempt to jet boat from the sea to the headwaters of the Ganges River, where they made first ascent of Akash Parbat.In 1985, Hillary and astronaut Neil Armstrong flew a small twin-engine plane to the North Pole, making Hillary the first person to stand at both poles and the summit of Everest, also known as the "third pole."

High Commissioner
From 1985 to 1988, Hillary served as New Zealand's high commissioner to Nepal, India and Bangladesh. He was made an honorary citizen of Nepal in 2003, on the 50th anniversary of reaching the summit.Devoted to helping the Sherpa people, Hillary founded The Himalayan Trust in 1960, which aimed to improving the health, education and general well-being of the people. Through the Trust, schools, hospitals and transportation hubs in Nepal where built.

Marriage and Family
Hillary met Louise Rose, but did not have enough courage to propose to her directly. Instead he asked Louise’s mother, Phyllis, to do it for him. In 1953, they married in Auckland with George Lowe as best man. They had three children, Sarah, Peter, and Belinda.In 1975, Hillary was devastated by the death of his beloved wife, Louise and daughter, Belinda when their plane crashed as they flew from Kathmandu to meet him in the village of Phaplu. In 1989, 14 years after the accident, Hillary married June Mulgrew, a lifetime friend.

Himalyan Trust
Following his ascent of Everest, Sir Edmund Hillary, devoted much of his life helping the Sherpa people of Nepal through his Himalayan Trust, which he founded in 1960 and continued to visit every year up till his death in 2008.Over successive decades, the Himalayan Trust built schools, airfields, bridges, hospitals and clinics in Nepal. It also restored Buddhist monasteries, including the famed Tengboche Monastery. All his work was in response to needs expressed directly by the Sherpas, who called Hillary Burra Sahib, which means, ‘big in heart.’

Ecology
Hillary, was the Honorary President of the American Himalayan Foundation, a United States non-profit body that helps improve the ecology and living conditions in the Himalayas. He was also the Honorary President of Mountain Wilderness, an international NGO dedicated to the worldwide protection of mountains. His portrait was on New Zealand’s five-dollar note.
Facts
Hillary, a shy man did not have enough courage to propose to Louise directly, instead asked Louise’s mother, Phyllis, to do it for him.After conquering Everest, Hillary said to his mate George Lowe: "Well, George, we knocked the bastard off."Two geographical features are named after him: the Hillary Coast in Antarctica and the Hillary Canyon, which is under water in the Ross Sea.Hillary's picture appears on the New Zealand five dollar note in 1992, which made him the first New Zealander to appear on money during his own lifetime.For his work with the Antarctica expedition, he was given the Polar Medal. Time magazine named him as one of the 100 most influential people of the 20th century.Hillary and son Peter, also a mountaineer, became the first to introduce jet-boats to India's Ganges River during a 1977 expedition to find the great river's source in the Himalayas.Hillary became a beekeeper and it was a summer job which allowed him time to climb mountains in the winter.Ironically, there is no existing photograph of Hillary on Mt. Everest, only Tenzing's picture. This is because Tenzing, did not know how to operate a camera, so Hillary had to take the photo.Hillary headed a team to the South Pole. It was for the first time ever that a team of people had reached the South Pole on motorcycles.He received an award from the Indian Government, called the Padma Vibhushan - the second highest award for civilians.Quotes
"Life's a bit like mountaineering - never look down.""It is not the mountain we conquer but ourselves.""People do not decide to become extraordinary. They decide to accomplish extraordinary things.""You don't have to be a fantastic hero to do certain things -- to compete. You can be just an ordinary chap, sufficiently motivated to reach challenging goals.""With practice and focus, you can extend yourself far more than you ever believed possible.""Motivation is the single most important factor in any sort of success.""If the going is tough and the pressure is on, If the reserves of strength have been drained and the summit is still not in sight, then the quality to seek in the person is neither great strength nor quickness of hand, but rather a resolute mind firmly set on its purpose that refuses to let its body slack or rest.""Human life is far more important than just getting to the top of a mountain.""I have discovered that even the mediocre can have adventures and even the fearful can achieve.""Challenge is what makes men. It will be the end when men stop looking for new challenges."Funeral

On 11 January, 2008, Sir Edmund Hillary, passed away after a heart attack, aged 88 in Auckland. NZ. Lady Hillary said he died peacefully, "He remained in good spirits until the end." On 22 January, 2008, New Zealand fare-welled, Sir Edmund Hillary with a state funeral, after which his body was cremated. On 29 February 2008, in a private ceremony, most of Hillary's ashes were scattered in Auckland's Hauraki Gulf, as he had desired. 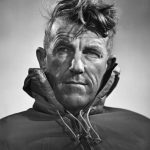 Martin Luther King Baptist Minister and social activist
An icon in American history, one of the most important figures of the 20th century, a prominent leader in civil rights movements for African-Americans....

Carrie Fisher Talented actress and author
An American actress, novelist, comedian and screenwriter, who was a cultural icon after her portrayal of Princess Leia in the epic Star Wars film series....

Estee Lauder A visionary businesswoman
An American business genius, who was the co-founder of the multi-billion dollar Estée Lauder empire, a pioneering global leading cosmetics company....
ExploreLots Of Shows

Games of Throne A Story Of Fire And Ice
A medieval fantasy television series based on George R.R. Martin's book series 'A Song of Ice and Fire' and the war among noble families for the Iron Throne....

Hitachi Seaside Park A Magnificent Floral Beauty
This Japanese Park in Ibaraki, renowned for its spectacular displays of flowers, showcase a variety of beautiful colored seasonal flowers all year-round....

Teuila Festival Cultural Celebrations
One of the most captivating and entertaining annual cultural event in the South Pacific, which celebrates the uniqueness of the Samoan culture and heritage....

Great Blue Hole A marine sinkhole marvel
A giant, deep blue circular underwater sinkhole off the coast of Belize, is a popular world-class destination for scuba divers attracted to diving in crystal-clear waters....
ShowstaEnjoy The Show